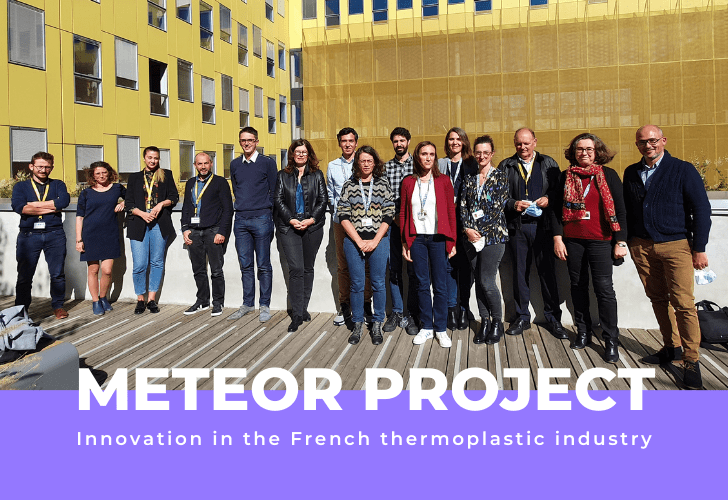 After 3 years of research and tests, the scientific team of the IRT Saint Exupéry and the members of the METEOR project (coMpEtitive ThErmOplastic pRepreg) have completed a project that plays a very important role in the optimization of prepregs based on high-performance thermoplastics carbon fibers and resin.

The METEOR project was born from the desire of GIFAS (Groupement des Industries Françaises Aéronautiques et Spatiales) to optimize the quality and cost of production of high-performance composites from competitive thermoplastic semi-finished products, 100% sourced from the French supply chain, and consolidatable by non-autoclave processes.

The mission of the METEOR project scientific team was to identify, develop and optimize all the steps of the value chain leading to carbon composites with thermoplastic matrix for applications on aeronautical structures.

For a better understanding of all the phenomena encountered, the involvement and intervention of the project team were essential at all stages, namely: the synthesis and micronization of PEKK*, the impregnation of various fibrous reinforcements, the draping and consolidation out of autoclave, in addition to all the tests necessary for this understanding.

“This synergy between the members has led to a set of solid results, which, consequently, have provided access to a better understanding of the various key stages in the manufacture of a high-performance thermoplastics carbon or resin composites.”

Aeronautical applications using high-performance thermoplastics for impregnation are still underdeveloped. Thus, METEOR has provided a better understanding of the key steps encountered during the various transformation phases, leading to the manufacture of semi-finished products (prepregs), and, then, to composites, by optimizing the oven consolidation process.

METEOR has also allowed to put forward the know-how of the French actors of the thermoplastics sector, that aimed at optimizing and reducing the cost and the energy impact of the manufacturing of prepregs and composites for an aeronautical application. This cost reduction can be achieved through raw materials, but also through a better understanding and control of the transformation processes used.

Finally, this project has represented a major step for understanding and optimization at the industrial scale. Thanks to the very promising results, the transition to the industrial scale of the various impacted technologies will be possible shortly. The IRT Saint Exupéry will, thus, be able to continue to contribute its expertise in a second stage, which will require new tests to further refine the understanding and control of the production of prepregs and thermoplastics matrix composites.

The synergy between the members

The main objective of METEOR can be summarized in two words: understanding and optimization.

The work undertaken was based on the specifications provided by Airbus and exchanges between all the expert members.

Indeed, Arkema – one of the members of the project – was able to remove several technological barriers to optimize the synthesis processes of the PEKK resin. This has enabled the scientific team to highlight the prospects for technical development on an industrial scale.

Another member of METEOR project, SDTech, identified and mastered micronization techniques of the raw material, to provide optimized powders for the impregnation processes.

The collaborative exchanges between the IRT Saint Exupéry, Hexcel Composites, Chomarat, and Porcher Industries have allowed the team to associate PEKK resins, carbon fibers, or special fibrous reinforcements. All this is to work on the understanding of the phenomena encountered during impregnation and consolidation and, consequently, on the optimization of the morphology of the prepregs necessary for the realization of composites.

Hutchinson also accompanied all the test campaigns by carrying out, among other things, the characterization of the composites produced, to provide the elements necessary for their understanding and optimization.

Finally, two theses were carried out with the ICA and the CNRT Matériaux. The objective of these theses was to refine the understanding of certain phases of the manufacture of prepregs:

This synergy between the members has led to a set of solid results, which, consequently, have provided a better understanding of the various key stages in the manufacture of high-performance thermoplastics carbon or resin composites. After an oven consolidation and by presenting a level of performance following the technical requirements of the aeronautical sector, the METEOR project has, thus, largely met the challenge launched by GIFAS.

Number of members and collaborators: more than 10 per day

METEOR Project: a technological breakthrough in the production of high-performance thermoplastic prepregs and composites.
Posted in Advanced Manufacturing Technologies, Projects By Benedetta CalderonePosted on November 23, 2021December 21, 2021