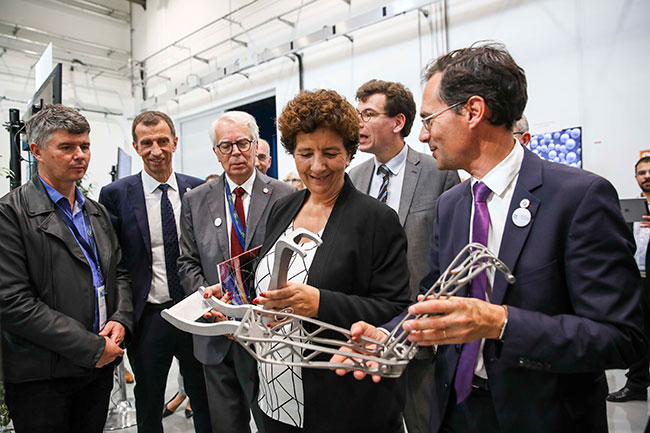 Over 400 people got together on October 11 for the 6th edition of the IRT Forum, hosted this year by IRT Saint Exupéry.

THEMATIC “VILLAGES” FOR IRTS AND SPACE, PLUS TOURS OF IRT SAINT EXUPÉRY PLATFORMS

To demonstrate the strength of a collective effort on strategic issues, the morning focused on IRT villages organized by theme: composite materials, additive manufacturing, artificial intelligence, cybersecurity, 5G/IoT and health. Many demonstrations, videos and samples were presented at the heart of IRT Saint Exupéry’s technological platforms, which were inaugurated on September 27. With its members and partners from the French space subsidiary, IRT Saint Exupéry also presented major innovations in the sector in the Space village. Tours related to the “more electrical aircraft” field were also very successful.

A RICH AND INTENSE PLENARY SESSION WITH SGPI AND MINISTRY OF HIGHER EDUCATION, RESEACH AND INNOVATION

During the plenary session, Vincent Marcatté, president of French Institutes of Technology (FIT), highlighted the quality of results presented with respect to ambitious objectives for 2018, with industrial transfers doubling in one year to reach 411. Guillaume Boudy, France’s Investment General Secretary, said that IRTs are an instrument of technological sovereignty. They are active players for developing tools that generate value: ITE, SATT, Carnot institutes, technical centre platforms… Frédérique Vidal, French Minister of Higher Education, Research and Innovation pointed out that, on June 21 at IRT M2P in Metz, the French Prime Minister acknowledged the progress made by IRTs and proposed three measures: bringing together IRTs and ITEs (Institutes for Energy Transition); preparing a sustainable course beyond 2025 and supporting the three-tier funding model (State, industry and other co-funding sources); while finally relaxing employment regulations for public-sector researchers within IRTs. Paul Labrogère, CEO of IRT SystemX, and Philippe Watteau, CEO of VEDECOM Institute, demonstrated this concept with the SAM project (safety and acceptability of autonomous mobility).

A NETWORKING EVENT AROUND AERONAUTICS AND INNOVATION

To give participants the taste of Toulouse and its aeronautics ecosystem, a tour of the assembly line at the foot of the impressive Airbus A380 was organised in the 10-hectare assembly hall at the 50-hectare Jean-Luc Lagardère site. From a look-out built into the Saint-Martin plant, a group enjoyed a panoramic view over the Airbus A350XWB final assembly line with an expert Airbus guide. That evening, Luc Ferry, writer, philosopher and former government minister, gave a conference on the third industrial revolution with artificial intelligence.

Jean-Brice Dumont, Executive Vice-President of Engineering for Airbus Commercial Aircraft, mentioned six examples of collaboration-oriented research in the aeronautics sector with four IRTS, Jules Verne, Saint Exupéry, M2P and SystemX. The IRTs are a real-world field application for Corac roadmaps. He concluded by saying that Airbus is very proud that the IRTs were created and will continue to invest money, personnel and energy to support them.

IRTS ACCELERATE INNOVATION THROUGH TRANSFERS TO THE INDUSTRY

Patrick Pirrat, an industrial expert in charge of regional development for Chantiers de l’Atlantique Directorate General, summed up his collaboration with IRT Jules Verne in three words: dream, adventure and hybridisation. Jean-Marc Talbot, Senior Engineering DSM/AMS Director at Mentor Graphics (Siemens), said that with Nanoelec, Mentor Graphics can anticipate the human, material and technological needs of tomorrow’s nanoelectronics. With its sense of secrecy, why does Nexter, the French land defence systems integrator, collaborate with IRT M2P Gilles Cholvy, Head of the Nexter Group Materials Expertise Division, provided us with some insight on this question: the IRT can find academic partners involved with the industry. Jean Scheftsik de Szolnok, President of Boehringer Ingelheim France, presented his partnership with BIOASTER and the set-up of a new R&D centre in Lyon ecosystem thanks to the high level in biology and microbiology.

Ludovic Noblet, Hypermedia and Promotion Director and b‹›com Licensing Director, explained that the IRT’s international dimension was planned from the outset. bcom joined the Fraunhofer Heinrich Hertz Institute (Germany) initiative on AI and health, as illustrated by Thomas Wiegand, Executive Director at Fraunhofer HHI. Grégory Flandin, head of the Intelligent Systems and Data Cluster at IRT Saint Exupéry, presented the collaboration with Montreal (Quebec) on the DEEL (DEpendable and Explandable Learning) project for certifying artificial intelligence in aeronautics, with Gilles Savart, general manager of IVADO, and CRIAQ, as explained by its CEO, Denis Faubert. IRT SystemX opened a representative office in Singapore, as exposed by its manager François-Xavier Lannuzel, thus positioning France at the heart of the smart nation concept, a national initiative launched by Singapore to become one of the world’s most advanced countries in the digital field. For Carole Magniez, coordinator of the Shift2Rail European Rail Initiative for Railenium, the IRT has always sought to be present at a European leve

It has been demonstrated by four of their PhD students who each took three minutes to present their research topics in a manner that could be understood by everyone.

Gilbert Casamatta, President of IRT Saint Exupéry and Vice-President of FIT, felt that this forum demonstrated IRT capacities for individual and collective action in a brilliant manner. The connection between the actions seen in the villages encourages IRTs to work together even more qualitatively and quantitatively to be the leading force in French technological research. While industrial partners are now familiar with IRTs, a step forward remains to be taken with academic partners regarding their involvement in longer 5-year roadmaps and scientific co-steering.

Scroll to top
We use cookies on our website to give you the most relevant experience by remembering your preferences and repeat visits. By clicking “Accept”, you consent to the use of ALL the cookies. Read More
Cookie settings ACCEPT
Manage consent

Any cookies that may not be particularly necessary for the website to function and is used specifically to collect user personal data via analytics, ads, other embedded contents are termed as non-necessary cookies. It is mandatory to procure user consent prior to running these cookies on your website.