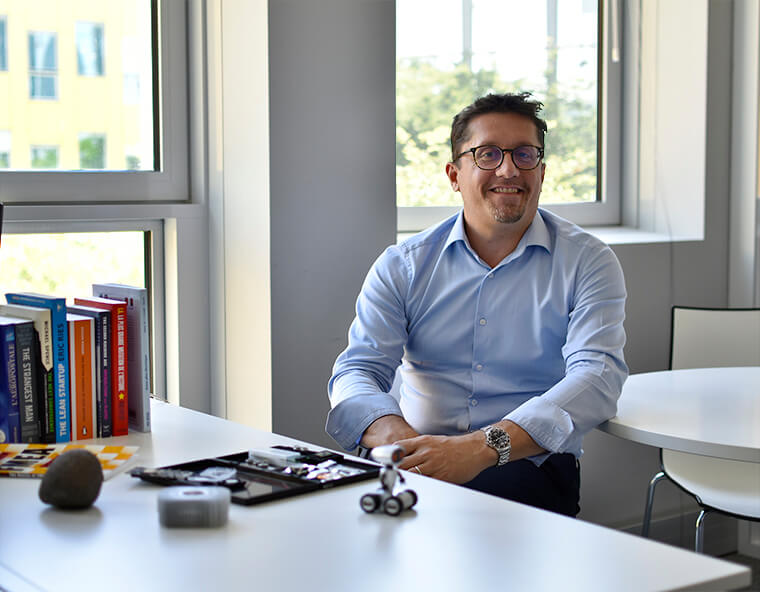 Can you tell us about your career so far?

My career path is at the crossroad between research and industry. I have spent half of my time in foreign or French research laboratories, with nearly a year at the University of Michigan (Ann-Arbor, United States), six years at the Technical University of Munich (TUM) in Germany and ten years at LAAS-CNRS[1] in Toulouse.

I have risen through every rank of a scientific career, starting at the University of Perugia (Italy) with a Master’s in electrical engineering, followed by a PhD thesis on high frequency engineering at TUM in Munich and a post-doc at LAAS-CNRS. I then qualified to supervise research (HDR) at INP[2]-Toulouse, obtaining the professorship qualification in 2015.

For six years, I combined my position as a researcher at LAAS-CNRS with the one as project manager in a Toulouse-based SME – Elemca – that specialises in the reliability of electronic components. I then joined the company full time. It was in 2014 that I created my own enterprise, RF Microtech France, to which I devoted myself for four years.

Can you tell us more about your role and your view of the integrated collaborative environment at IRT Saint Exupery?

I am passionate about technologies that help people. IRT managers have complex situations to handle especially when the convergence of industrialists and researchers’ mind-sets is at stake. I think I have some talent for bringing people together, and this is a very useful gift at IRT Saint Exupéry, which aims to connect SMEs, corporations, researchers, students, interns and foreigners – in short, very diverse professional cultures. Such a mixed working environment is unique. Managing this complexity needs a lot of patience and psychology in addition to the expertise in, and a passion for, the technology that is our main undertaking.

I have always been enthusiastic about understanding things and especially curious about the unknown. Scientists prepare the ground for engineers, doing the groundwork, defining the rules and laws. The engineer then takes hold of the subject and makes the airplane or the radio. I am somewhere between the two with respect to our mission which is to enable innovation.

IRT Saint Exupéry is now anchored in the landscape with widely recognized areas of excellence or areas that are on the verge of being recognized. We have the obligation, the privilege and, for me, the pleasure, of listening to the needs of industrialists and connecting them with the scientific findings. It’s an obligation because it’s the work we’re paid for. It’s a privilege because we’re located at the top of a mountain, Toulouse which lays at the heart of an aerospace ecosystem with an exceptional multi-sector overview, and hence with an exceptionally wide perspective. And it’s a pleasure because, thanks to my experience, I have the opportunity to exchange views and get to know outstanding researchers and industrialists with top human and professional qualities.

Where are you with the more electric aircraft projects?

There is a strong link between these two projects, but even if they are relatively close, the technologies used and their maturity degrees are different.

This domain developed five large projects – HIGHVOLT, HYBELE, EPOWERDRIVE, FELINE and SICRET – with around 75 people involved, a quarter of whom are at IRT, a quarter are doing theses or post-docs, and half seconded by member companies. We have undergone a major overhaul since the Covid crisis to adapt to it. Despite the situation I am convinced that the innovation driven on by these projects, and the projects that will follow, is the only way out of the current economic situation. Even though the waters have receded, we are actively preparing for the rising tide.

The FELINE project and, more recently, the SICRET project – which fall within the perimeter of my center of competence – focus on commercial electronic components. The goal is to predict the reliability and risk associated with their use in highly demanding and severe operational environments.

The team works on any available knowledge aiming to improve methods and tools for calculating and measuring the reliability of electronic components and equipment. To do that, the researchers attempt to understand the mechanisms of physical degradation or failure using numerical and experimental modeling and set up more efficient tests adapted to the user’s profile. They aim to cut the requalification costs associated with electromagnetic compatibility (EMC) constraints or linked to exposure to cosmic radiation. Last of all, they define robust design rules that incorporate the notion of margin and lifetime.

IRT Saint Exupéry has laid the foundations for these very unifying multi-sector technical subjects, where the sharing and centralizing of knowledge are the key to success for breakthrough innovation and a company’s competitiveness. The three centers of competence which form the electrical department at IRT, capitalize on ten experts whose mission is to listen, to catalyze and finally encourage scientists and industrialists to work together. Owing to our relatively small organization combined with very specific skills – supplemented by those in other fields such as materials, system engineering and artificial intelligence– IRT Saint Exupéry offers a model of “R&T agility” that can really make the difference!

What are the areas of expertise in your competence center that you think are spine of IRT Saint Exupery?

In my competence center, there are five different profiles of expertise.

The first expertise focuses on the reliability of semiconductors, the industry that underpins the world’s most powerful economy. These semiconductors are either integrated circuits that generate computing power (processors, FPGAs, etc.) or store data (memories). In addition to those there are the semiconductor components capable of handling strong electrical powers (power transistors). The challenge then is to understand how they deteriorate during their lifetime so that we can predict the constraints such as the availability, maintainability, and safety of the systems they are part of.

A second expertise, which borrow the afore mentioned approach of reliability, is focusing on electrical energy sources and storage solutions, such as batteries and fuel cells.

A third EMC area of expertise focuses on the disturbances associated with electromagnetic waves received or emitted by electronic equipment. The aim is to equip design engineers – the people responsible for manufacturing processes and qualification tests – with the skills and tools needed to diagnose and predict functional flaw that may occur over the entire life cycle of a product. Unfortunately, EMC is often relegated to last position, or, worse still, is tackled only when there are glitches or a malfunction in equipment that has undergone multiple successive developments during the life of the product, a period that can be as long as 40 years in aeronautics. The push towards embedding increasingly complex and sophisticated systems – combined with costs optimization and severe certification and commissioning requirements – demands to pay special attention to EMC from the start of the product design process.

A fourth skill is associated with immunity to natural radiations to study robustness with respect to cosmic radiations (neutrons, protons, and heavy ions, …). This area is enjoying rapid growth in several sectors, not just aerospace (the automotive, rail, naval and defense industries), given the trend towards the miniaturization of components and the increase in voltages and currents in embedded electronics.

A final area of expertise, which is shared with other centers of competences, focuses on the reliability of electrical and electronic assembly and interconnections. The objective is to assess the failure and aging phenomena affecting these assemblies, which undergo a combined Multiphysics (electro-thermo-mechanical) function and stress. Indeed, this type of flaw is one of the main sources of failure in applications with high environmental constraints that are typical of the aerospace or automotive sectors.

What have the outcomes been??

An example of an outcome resulting from the FELINE project is the implementation of a methodology known as FRAME[13]. This allows our members, to find out whether a component issued by an emerging technology and becoming available on the market, is suitable or not for their specific mission profile. This example is emblematic of the solutions that IRT Saint Exupéry can provide for transversal, multi-sector, precompetitive and multidisciplinary subjects, where our members often do not have enough critical size. As matter of fact, I am lucky to work on reliability, since this area is a highly unifying, priority subject in the industrial value chain. This know-how is capitalized internally so that we can continue to train the experts of the future. Endowed by a keen technological focus and coming from industrial and scientific backgrounds, these individuals represent the pillars of the current R&T programs and the catalysts for future projects.

What do you like about your work at IRT Saint Exupery?

IRT for me is a meeting place between different human and professional experiences. It is “the place to be” for anyone who is curious and technology-addicted like me. I am really attached to the multi-cultural aspects, as illustrated by my background (Italy, Germany, and USA) and my multi-professional career (researcher, engineer, and entrepreneur).

Complexity, often seen as a shortcoming, is a challenge for me. Things that are easy have never interested me. What attracted me to IRT Saint Exupéry was also the difficulty of the challenges.

The triangle of the innovation that is so dear to Alain Costes, former director of LAAS-CNRS and a leading figure in economic development research, is well embodied by IRT with the research and industry components and, ultimately, the transmission of knowledge.

In short, I am like a fish in water here.

Do you have an anecdote you can share with us?

In 2018, when I had my recruitment interview with Ariel Sirat, IRT director from 2013 to 2019, he asked me about my motivations for coming to IRT Saint Exupéry. And I replied: “During my 20-year career, I have worked hand-in-hand with researchers and industrialists. I have strived on countless occasions to convert differences into opportunities, becoming what I will call a scientist who connects people with the desire to facilitate innovation. In a nutshell, I’ve been preparing for IRT for 20 years!”.