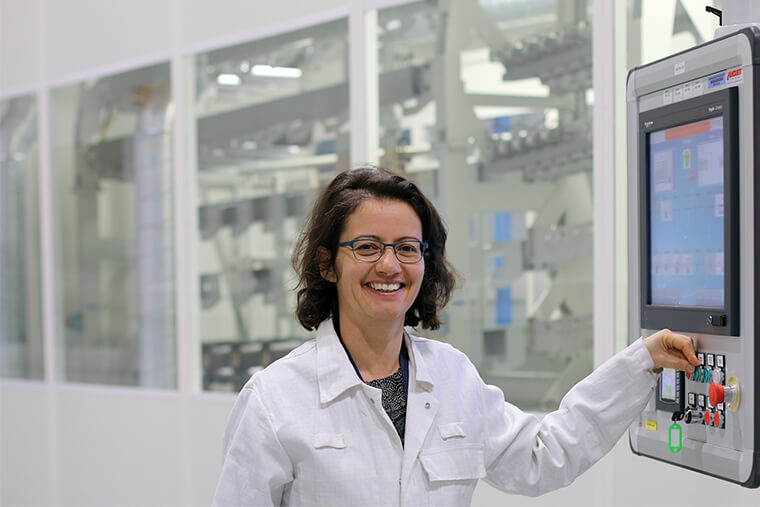 I was attracted to research because I liked to understand things, and I started with a DEUG A (two-year university diploma) in Material Sciences at the University of Aix-Marseille III. The educational organization at the university appealed to me: discovery, choosing the subjects and being autonomous. My interest in sports, especially tennis, guided me towards Material Sciences. I joined an engineering school, ESPCI[1], which was directed at that time by Pierre-Gilles de Gennes, oriented towards scientific research. During my third-year internship at Rhodia, I discovered Polymer Science After my DEA in Materials Science (Master 2) at Pierre et Marie Curie University (Paris 6) on the Jussieu campus, I went off to do a Cifre[2] PhD thesis on rapid methods of analysis of the molecular structure of polymers in collaboration between BP Chemicals in Lavéra near Marseilles, and the CEMEF[3] laboratory at Sophia-Antipolis. There was already a lot of corporate restructuring at the time in the field of petrochemicals with these commodity polymers for plastic bags that are so maligned nowadays.

Company restructuring has been the story of my life…

In 2003, my PhD thesis supervisor offered me a position at BP Chemicals in Wingles near Lille to provide technical support and take in charge the product optimization of the expandable polystyrene product range in an application laboratory. I discovered the coalfield landscape with its slag heaps, together with pink bricks, the Ch’tis and the world of industrial production.

After four years on the French Riviera, the change was sudden! The application laboratory was equipped with pilot reactors. We carried out R & D studies to incorporate carbon black particles into expandable polystyrene to improve its thermal performance for insulation building applications. I covered the British and Scandinavian markets for the customer support. I found out about all the problems associated with the materials industrialization process and customer / supplier relationships.

The firm was bought by Ineos in 2005, and the expandable polystyrene division went to Holland and I was transferred to a new R & D position in mass polystyrene unit. I then worked with the process department to optimize and improve the manufacturing process. One of our goals was to reduce the amount of rubber in HIPS[9] polystyrene. The experts argued that an additional reactor was needed to modify the process and that we wouldn’t succeed without substantial investment. I highlighted that, by playing with the molecular mass of the polymer chains, it was possible to reduce the amount of rubber by 0.5 %, a proportion that had never previously been obtained, meaning the investment could be delayed.

In 2008, I switched off in the direction of more technical materials of the future, which is how I joined the building and insulation division at Porcher Industries, which made technical textiles. This Lyon-based SME was looking for Material Science engineers to develop technical textiles with functionalities adapted to market needs. In January 2008, after downsizing measures were introduced, I was transferred to the Badinières site, where I subsequently took charge of the local R & D team.

But the expanding market was composites. To move towards more technical materials – and for personal reasons – I wanted to come to Toulouse. I had heard about IRT Saint Exupéry in 2014, and then one fine day in 2015, I spotted an ad: IRT Saint Exupéry had an opening for a platform engineer for composite department. I had exactly the required skills: expertise in the links between materials and processes. I’ve always made my professional choices based on the technical interest of the positions on offer without a pre-defined career plan. I work because I like it, regardless of the context: a large group, SME or the emerging IRT Saint Exupéry.

How did the implementation of the famous thermoplastic impregnation line go?

The line started with the COMPINNOV TP project on thermoplastic (TP) composite materials. They’re lighter, more resistant and recyclable, and they’re becoming increasingly popular as a replacement for metal. With Damien Coudeyre, the project leader, and Jean-Marie Des, head of the materials platforms, we got off to a lightning start because everything had to be done from scratch! Some machines were just beginning to arrive in the Catar hall on the Rangueil campus, such as the extruder and the sizing line.

Prepreg, what is it?

Indeed, before functionalizing the project’s unidirectional (UD) carbon prepregs, we had to learn how to make them and define the specifications of the future impregnation line. On the very day I arrived, I took part in the meeting to select the supplier for the line: Huguet Engineering, with whom we then worked in tray mode for about six months to define the technical specifications for the impregnation line. The order was placed at the end of 2015, then there was the commissioning, starting up the machine, upgrading the skills and the gradual arrival of members of the team. Impregnation process of technical textiles isn’t taught at college because the industrial know-hows are secrets, so there was everything to do.

We designed a highly scalable machine. The morphology of the prepregs – the distribution between the reinforcement (carbon fiber) and the organic matrix (polymer) – is very closely connected to the manufacturing process. That’s why we’re developing different impregnation technologies to tailored composites versus targeted performances: slurry, powder impregnation, spraying, etc.

Can you tell us more about your role as technical advisor for the impregnation processes at IRT Saint Exupéry?

This recognition goes back to 2018. I gained valuable skills in impregnation processes of technical textiles from my know-how during my earlier experience at Porcher Industries. I’m the only one who has come out of the textile industry.

Every member of the CMO TP team (about 10 of us) has a specialty in an impregnation technology. This means the platform is constantly changing, not forgetting the debugging inherent in a tailor-made line. The line has grown from 14 meters to 21 when it came to the large premises of the B612 building in 2018. The longer cable length caused new steering problems.

Very few industrials are expert in manufacturing a carbon prepreg with a high-performance thermoplastic matrix. The level of maturity of the related manufacturing process is relatively low compared to thermoset materials that have been used for a long time. There are not yet any TP primary structural parts qualified in aeronautics because this material does not yet have a large enough production base and its implementation is not properly controlled. This is the innovation dynamic we are in at IRT Saint Exupéry.

What results have been obtained and are expected?

Setting up a thermoplastic composite technology platform has been a great success for carrying out R & D studies, from implementing the high-performance polymer resin to its impregnation with carbon fibers.

This platform includes the impregnation line whose installation I described earlier. This line has a semi-industrial scale, unique in the world, and has been open to industrials and academics since it was commissioned in 2016. The COMPINNOV TP and METEOR projects – and soon COMPINNOV TP2 – use it for their R & D activities and some first subcontracts were carried out.

The platform is also equipped with an induction welding robot. This equipment has supported the R&D activities of the SOFUSIN project on the innovative assembling of high-performance composite parts by susceptorless induction welding, a susceptor being a conductive metallic material conventionally used to transfer heat.

As I come from academia through part of my training and my PhD thesis, and from industry – where I learnt about production and technical support – IRT Saint Exupéry was immediately of interest to me. I have wonderful memories of my university years. Thanks to IRT, the link has been made between academia and industry. During my professional experience in the north of France, I had discussed MET[10] analyzes with the University of Lille, but no action was taken because of a lack of resources and staff. It’s such a pool of resources and skills! IRT is able to manage these time scales between a PhD thesis and the rapid response that a manufacturer requires.

Do you have a small story to share with us?

“I design dreams and you make them come true” – that’s what Damien Coudeyre, COMPINNOV TP project leader at the time, confided to me one day.