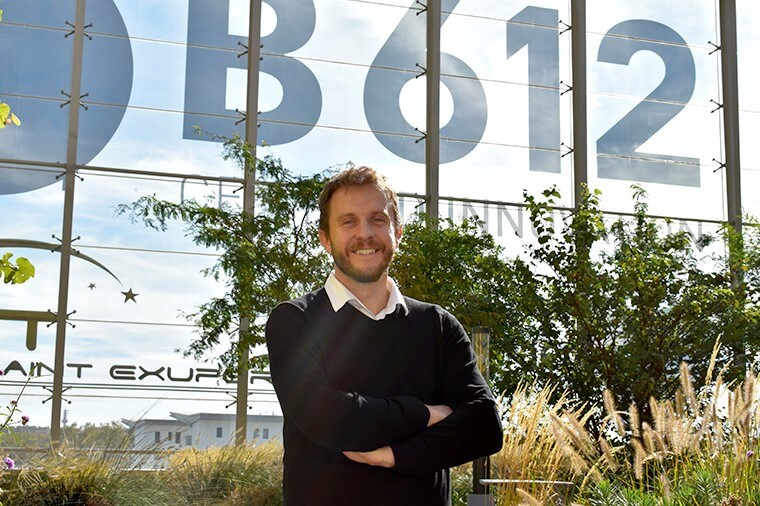 Can you tell us about your career so far?

I’m a graduate of Ecole Polytechnique (2000) and Télécom Paris (2002). I started my career in the medical imaging research centre at Philips Healthcare (based in the Paris region at Suresnes), where I implemented image quality improvement techniques for x-ray medical imaging systems.

After eight years, I wanted to move regions and improve my career prospects. I headed towards space imagery with Airbus Defence & Space, where I joined the department for processing remote sensing images obtained by satellite. Aside from the measurement chain, the techniques – removing noise, registering images or even detecting certain structures – were similar.

A large corporation offers a lot of opportunities, and quite soon I began working on other space systems, especially ones dedicated to maritime surveillance. Capturing AIS[1] transmissions from vessels from space opens up great prospects for the global management of maritime traffic. After this experience, I managed a centre of expertise dedicated to processing techniques for radio frequency signals for two years.

In 2016, I joined the mission planning department for earth observation satellites. The problem is to compute the image acquisition and downlink plan on the ground, relying on optimization algorithms that identify the best shots to be taken based on user requirements, while respecting the constraints linked to the satellite and its optical instrument.

These techniques are developed strongly at IRT Saint Exupéry.

Can you tell us more about your role on the irt saint exupéry oce project, which has yielded impressive results, and on the synapse project that took over from it?

I started part-time at IRT Saint Exupéry in 2014 in parallel with my job at Airbus. Grégory Flandin, who was seconded from Airbus, took over responsibility for the OCE project, part of which was looking at mission planning for earth observation satellites.

As part of OCE, we studied new decision-making techniques based on multi-agent systems and applied to planning a satellite constellation. This was the subject of Jonathan Bonnet’s PhD thesis, which he defended in 2017 (see news). If we consider a fleet of a dozen (or even a hundred) satellites, the issue of acquisition planning becomes extremely combinatorial, and we can’t solve it efficiently with a monolithic algorithm. Adaptive multi-agent approaches can be used to break the problem down and solve it via interactions between a large number of cooperative agents to bring out a global solution. We have benefited from a fruitful collaboration with researchers from the SMAC[2] team at the IRIT[3] laboratory since the OCE project, which is continuing with Synapse.

With this latter project, we’re focusing on the planning of large area coverage (countries and continents). To fully images such a large surface area, numerous basic acquisitions are needed, and you have to wait for a great many orbit revolutions of the different satellites. To reduce the coverage time and manage the satellite resource more efficiently, we use artificial intelligence algorithms to plan over the long term and to anticipate weather conditions, including the cloud cover that generates unusable images.

A current trend involves moving towards AI techniques, such as reinforcement learning. It’s a highly promising approach, developed in particular by Google DeepMind for the game of Go, which has generated a lot of buzz. By exploiting neural networks and decision-tree exploration techniques, the computer learns to improve via trial and error. For our large coverage problem, it will be all about choosing the best basic image acquisitions for each satellite so we can cover the zone as quickly as possible.

What impact has your time at irt saint exupéry had on your career?

IRT Saint Exupéry is a unique platform for working in an integrated manner with an entire, highly-developed ecosystem in the Toulouse area: IRIT, ISAE-SUPAERO, major industrial companies such as Airbus Defence & Space and Thales capable of collaborating on immature technologies or SMEs like Reuniwatt (see the portrait of Olivier Liandrat). In my role as Airbussenior expert, I need to develop my network, both internally and externally, with great precision. IRT Saint Exupéry is a major lever for extending this network with researchers and smaller companies.

What results have been obtained?

The OCE project has had an immediate impact on using the cloud to make massive image productions associated with deep learning to analyse images and automatically detect objects of interest (clouds, airports, aircrafts). For satellite mission planning, multi-agent techniques are making a breakthrough and are being adopted by industry. They provide an appropriate response to the need to operate the mission of large systems, such as a constellation of satellites or a heterogeneous set of interoperable systems.

Today, I’m still coming to IRT Saint Exupéry nearly half a day a week. I’m monitoring the work of the SYNAPSE project and supervised the PhD thesis of Timothée Jammot[4] , which is taking on a very promising approach: to make the link between multi-agent techniques and those of reinforcement learning.

The OCE project has had an immediate impact on using the cloud to make massive image productions associated with deep learning to analyse images and automatically detect objects of interest (clouds, airports, aircrafts). For satellite mission planning, multi-agent techniques are making a breakthrough and are being adopted by industry. They provide an appropriate response to the need to operate the mission of large systems, such as a constellation of satellites or a heterogeneous set of interoperable systems.

Today, I’m still coming to IRT Saint Exupéry nearly half a day a week. I’m monitoring the work of the SYNAPSE project and supervised the PhD thesis of Timothée Jammot[4] , which is taking on a very promising approach: to make the link between multi-agent techniques and those of reinforcement learning.

When we were still working out of prefabricated buildings in the Rangueil area, we had small numbered boxes to keep the keys in. The mnemonic we used was to assign the number of the office to these codes. We moved several times inside these buildings as we followed IRT Saint Exupéry’s rapid growth. The office numbers were changing but not necessarily the codes… In short, I have memories of being locked outside the doors!

It’s still pretty good to have left these half-empty prefabs behind, to have built a third wing and to have occupied the entire premises bit by bit, and then to have moved into this beautiful building, B612, where so much happens. It’s emblematic for Toulouse, which is becoming a major platform for research. Not to mention the arrival of former Minister Geneviève Fioraso as the new president of IRT Saint Exupéry, which is another strong sign.