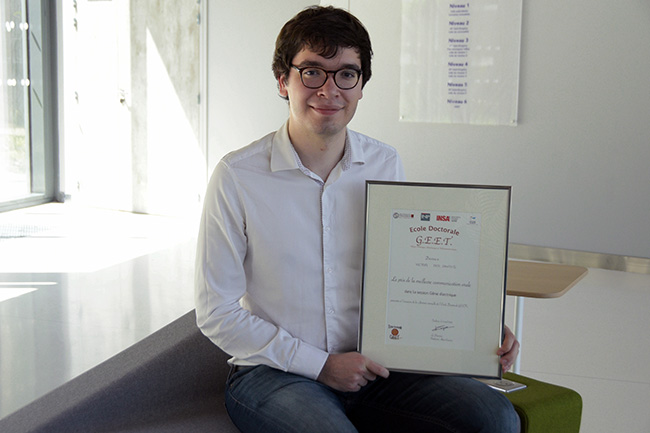 The GEET Doctoral School Congress Contest allowed PhDs to present their thesis works in the field of electrical engineering, electronics and telecommunications.
Four others IRT Saint Exupéry PhDs have also presented their research in electrical engineering sessions.
The high quality and the relevance of Victor’s presentation highlights the efficiency of public/private collaboration thanks to the Institutes of Technology model. This thesis is supervised by the Laplace and IRT Saint Exupéry.

In a more electrical aircraft, all electromechanical chain components have to be compact, efficient and reliable.
Victor’s research focuses on the simulation and testing of these components by taking into account of EMC constraints as part of INTEGRATION project.

The aircraft industry is pushing towards the concept of More Electric Aircraft (MEA) to improve aircraft performance. This requires the use of electromechanical power drive systems. However, power converters will only be effectively used in future aircrafts if they are compact, efficient and reliable. All these aspects can be improved by the use of disruptive technology such as the so-called Wide Bandgap (WBG) semiconductors made of Silicon Carbide (SiC) or Gallium Nitride (GaN). These components can switch much faster than their silicon counterpart, which can reduce converter losses and also decrease differential mode filter given the increase of switching frequency. However, such a fast commutation increases Electromagnetic Interference (EMI) issues in the converter and loads connected to it. It is against this background that the present study was set in collaboration with the French Institute of Technology (IRT) Saint-Exupery and Laplace laboratory. The scientific objectives of the thesis are the following ones:

Optimization of the electromechanical chain by increasing electrical system power density, and reducing the weight of all components by working on 3-D power module integration, converter architecture, and motor iron losses.