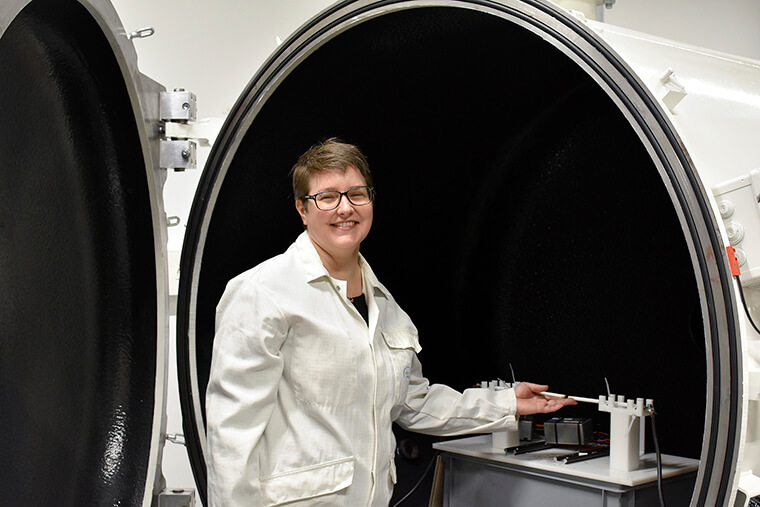 I’m originally from the Paris region. My higher education began at the Pierre and Marie Curie University, where I majored in plasma physics and astronomy/astrophysics. During an internship at the Paris Observatory, I realized that astrophysics work focuses more on processing figures—a far cry from the beautiful images that had fascinated me since childhood. During my master, I discovered electric discharges. The visual aspect, and even the auditory aspect, immediately appealed to me. So I chose a topic having to do with electric arcs for my PhD thesis, which I defended in 2008, and I’ve been faithful to them ever since. I’ve dealt with electric arcs in several domains: in aeronautics, for my PhD thesis at ONERA[1] in Palaiseau; in the railroad sector for my post-doc at the Technological Transfer Centre at the ESIEE[2] engineering school in Amiens; and in metallurgy when working on my second post-doc at the Jean Lamour Institute in Nancy.

Then in 2012, I got a position as an engineer at Aéroconseil/Akka Technologies in Toulouse working on the protection of aircraft against the direct effects of lightning. I wasn’t doing research anymore, but I loved seeing what goes on behind the scenes when walking up and down the Airbus and ATR assembly lines. Unfortunately, when the contract with these companies have been lost, I was redirected to an environmental qualification and certification activity, far from electric arcs. Determined to return to the world of research, I responded to the job offer at IRT Saint Exupéry for Zodiac Aerospace. I started in 2015, happy to return to my favorite subject.

What was your role in the fiabilite project of IRT Saint Exupery?

I arrived mid-way through the FIABILITE project.Zodiac Aerospace wanted to study dielectric breakdowns in air. These electric discharges occur when there is a high potential difference level between two conductors. An insulators (or dielectrics) breakdown – air in this case –takes place. The voltage level required to produce it varies according to numerous parameters, such as the medium in which is it created, or the shape or material of the electrodes. My role was to test these voltage levels for different values of these parameters.

Next, I supervised a post-doctoral researcher, Loïc Hermette, who was studying the influence of the nature of the insulation deposited on busbars conducting high currents in embedded equipment. The second post-doc, Guillaume Belijar, focused on foreign object debris, or FOD. These objects cause electric arcs in equipment when they fall between two conductive metal bars. Results have shown that arcing depends to a great extent on the size of these foreign objects and that they are difficult to avoid.

Dielectrics what is it? This word, composed of the prefix dia (δια) which means “through”, most often refers to an electric insulator. A material is dielectric if it is free of electrical charges that can move macroscopically. Therefore, it cannot conduct electric current.

Tell us some more about irt saint exupéry’s highvolt project and your role in it?

I am currently in charge of the electric arc lot. The initial phase of gathering requirements was complicated due to the large number of partners and the diversity of demands. After this stage, which consumed a lot of energy, I am going to get back to what interests me most–the technical aspect!

I also participate in the HYBELEC project, which aims to build up the same level of knowledge to optimize the mass of cable components. Very powerful cables are necessary to satisfy the aeronautics applications of future electric or hybrid propulsion. My role concerns the surface treatment of electric contacts, which is complementary to problems of electric arcs in electronic connectors or switches.

What results has the highvolt project yielded?

The first results concern the multi-physical measurements of electric arcs. The arc is a phenomenon that combines several areas of the physical sciences: it produces light, sound, or vibration of the elements on which it appears. We are currently creating a data base that includes measurements of different types of sensors adapted to a physical phenomenon (a photodiode, for example, for UV emissions), and different types of electric installation for a sensor and for different test configurations such as pressure, current and voltage. The data base will be passed on to our partners to help them develop their means of arc detection in their embedded equipment. Our measurements, made with a wide range of physics and technologies, will enable our partners to choose the sensor that is best suited to the equipment they want protected.

On the sidelines of the projects, the arc platform offers services managed by Nicolas Chadourne, in charge of the More Electrical Aircraft platforms. Our platform is constantly being expanded to satisfy different aeronautics constraints such as current and future voltage levels, high power, and environmental constraints (low pressure to simulate a plane in flight). To this end, equipment must be specified with the highest possible level of representativeness. This is very ambitious, if not impossible, given the diversity of types of airplanes and architectures with equipment powered by different means. It calls for a huge amount of teamwork.

Both projects – FIABILITE and HIGHVOLT – have generated many publications, and we will be presenting our research regularly at scientific conferences.

What do you like most about your work at IRT Saint Exupery?

What motivated me about IRT was the connection between academics and the industrial world. I said to myself, “This is exactly what I want to do!” Given that the jargon is completely different in these two realms, as are the expectations, and that you have to adapt to both in order to reach consensus, it’s really a huge motivation. While my PhD supervisor was geared to the academic world, my advisors were more on the look-out for industrial needs. That’s where I became aware of the problem of communication. It’s all tremendously enriching, but you have to find the right person to talk to!

Do you have a small story to share with us?

When I first came to the IRT, I had to explain to everyone what it was. Now people answer, “Oh yes!” Even if they can’t place it exactly, they’ve heard of the IRT, as well as of building B612, which is highly visible from the beltway around Toulouse.

Scroll to top
We use cookies on our website to give you the most relevant experience by remembering your preferences and repeat visits. By clicking “Accept”, you consent to the use of ALL the cookies. Read More
Cookie settings ACCEPT
Manage consent

Any cookies that may not be particularly necessary for the website to function and is used specifically to collect user personal data via analytics, ads, other embedded contents are termed as non-necessary cookies. It is mandatory to procure user consent prior to running these cookies on your website.