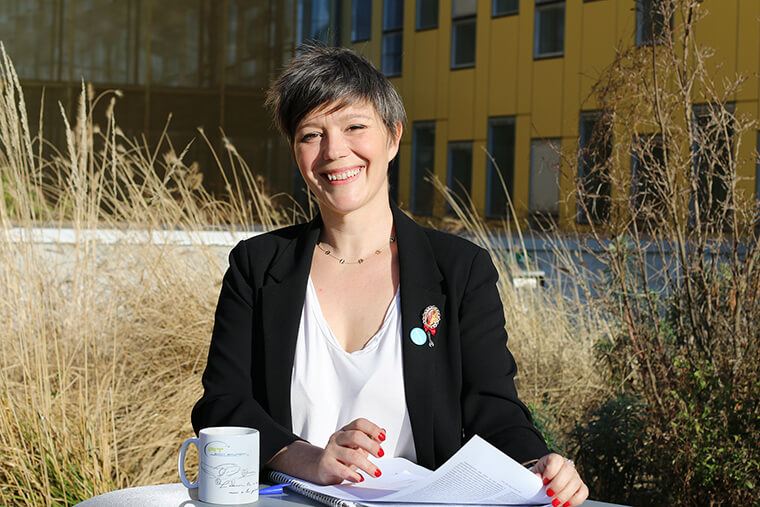 I was tempted hugely by philosophy and physics, which satisfied my hunger to understand the world, and I eventually chose a training in theoretical physics at Université Joseph Fourier[1] in Grenoble. When I finished my master’s degree, I went off to find out all about archaeometry[2] at the Demokritos Research Centre in Athens. After that I changed tack towards a DEA (Master 2) in physics of matter and radiation, specialising in biophysics. In 2006, I started a PhD thesis in microfluidics – the science of fluid manipulation on a micrometric scale – as part of the BIOMICS[3] project at the LIPhy laboratory[4] in collaboration with ESPCI Paris-PSL[5] and the MRC[6]-ULB, funded in part by CNES and ESA. My subject – the dynamics of vesicles under flow – was a perfect cocktail of theory and practice.

The aim was to get a better understanding of the individual dynamics at the microscopic scale of red blood cells, of which the vesicle is a simple mechanical model, and from that to deduce its impact at the macroscopic scale on blood circulation. The experiments were reproduced in microgravity, i.e. using highly-attenuated gravity effects, during parabolic flight campaigns on board the Airbus A300 ZERO-G and in a sounding rocket (MASER 6). I loved these very intense experiences.

Labs-on-a-chip, which were very popular at the time, held the promise of quick, precise, sensitive and low-cost biochemical analysis techniques for medical diagnosis. So I decided to get better acquainted with biotechnological engineering by joining the University of California Santa Barbara in 2008 as an associate researcher in microfluidics as part of Igor Mezić’s group, which specialised in the dynamics of complex systems. Miniaturisation raised new challenges, such as the mix between the reagent and the sample, which I tackled using electrokinetic methods consisting of applying an alternating current electric field to generate the movement of solid particles in a conductive liquid or gel. I developed micro-mixers for biochips and microplates. The biochips are micro-structured objects that are manufactured using techniques borrowed from microelectronics. A set of DNA molecules attached in rows quantifies the level of gene expression. They have multiple uses, such as determining the genetic signature of tumours in oncology or detecting pathogenic bacteria in environmental genomics. As for microplates, they can be used to perform medical diagnostics via immunoassays, which use the antigen-antibody reaction to detect and quantify antigens, antibodies or related substances.

After a year, I combined my academic work – increasing the number of inter-departmental collaborations to test the performance of micro-mixers on different types of samples (DNA, proteins and immunoassays) – with a part-time job at Integrated Fluidics Inc., a spin-off founded by Igor Mezić to design the industrialisation of the micro-mixers.

I felt the need to put down roots in Europe. The nano-engineering and systems-integration team at LAAS-CNRS[11] in Toulouse welcomed me to do a project by the STAE foundation micro-laboratory for environmental observatories. The goal was to provide an in situ microsensor to determine the concentration and molecular form of mercury, a toxic element found in trace amounts in the water in rivers and oceans. I worked upstream of the mercury detection on preparing the sample and the filtration of suspended particles. We had to avoid conventional detection based on electric fields that could modify the molecular form of mercury, as well as the membranes, which are difficult to make and liable to get clogged up. I then developed a passive, purely hydrodynamic, technique that sorted the particles according to their size by acting on the separation of the flows. All LAAS-CNRS’ microelectronics expertise was invaluable for manufacturing the microscopic channels for this sensor.

How did you make the transition to the world of AI?

The emergence of AI ringed a lot of bells as I realised the power of this tool in all the areas I had known, whether for reconstructing the images of the holographic microscope during my thesis or for optimising the design of microfluidic chips when I was at LAAS-CNRS – or even for classifying archaeological marble. And then I had the opportunity to join Jolibrain, a VSE specialising in deep learning that was looking for expertise in physics to develop hybrid AI models combining problem-solving using conventional numerical equations with machine learning. We worked in particular on an algorithm for the accelerated simulation of fluid flows to optimise the design of, for example, aircraft wings or fuselages, in partnership with a team from ISAE SUPAERO.

What is your role at IRT Saint Exupéry?

I’m now at IRT Saint Exupéry as a deep learning expert to develop hybrid models by introducing physics into machine learning and vice-versa. The main project I’m working on is the SB project overseen by Grégory Cazanave, which is looking at the environment in the Thau basin and the coastal environment in general. The management of these complex environments, which boast strong spatial and temporal dynamics, requires comprehensive observation systems. The aim of the SB project is to provide different tools to manage the resource (drinking water or oyster beds) and the risks (submersion, flooding or ground movement) by collecting the maximum amount of information based on the type of data (field, satellite or digital).

One of the axes consists of hybridising classical numerical methods of flow modelling with deep learning methods to accelerate modelling in the field of forecasting and crisis management.

I also work as a technical supervisor on the DEEP4CAST project, which focuses on AI applied to weather forecasting (rain and cloud cover). We’ve already had good results thanks to the students and engineer who are working on it.

Last of all, I’m involved in the internal AMIMAIA project that started recently with the materials department. It aims to automatically characterise microscopic images of composite materials. I really like the dynamics of this type of project, which makes nearly as much progress around the coffee machine as it does in meetings.

The abundance of all these different kinds of profiles is great. I like the simultaneous closeness between researchers and industrialists.

Once again, I’m not standing still in terms of my skills, since I’m immersing myself enthusiastically in this new culture linked to AI: the primacy of conference communications rather than publishing in high-impact factor journals like Nature; the opening up of open-source code; and the reliability of the reproducibility of digital experiences that are less dependent on the vagaries of the physical world. Not to mention being in touch with the new generation of engineers that learned to read by coding. That also imposes a very dynamic rhythm, which I like a great deal.

Do you have an anecdote you can share with us?

My rich and winding journey has been like a balancing act between theory and practice, speed and slowness of maturation or even the physical and the virtual. It takes on its full meaning in a world such as IRT Saint Exupéry. Theory and technique intertwine and feed off each other. It’s very exciting!

[8] Sciences and Technologies for Aeronautics and Space

[11] Laboratory for Analysis and Architecture of Systems