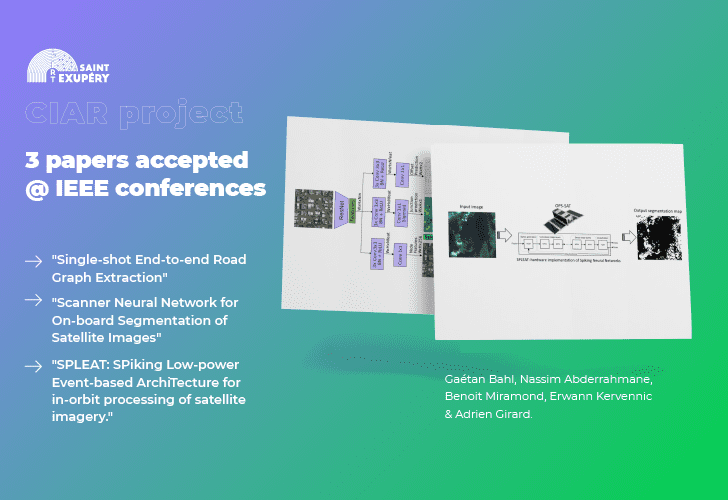 Within the framework of the CIAR project, 3 papers have been accepted. They deal with different yet complementary arguments.
Two of these papers were produced in the framework of Gaétan Bahl’s thesis, while the third one represents a world first in the fields of aerospace and impulse neural networks

The paper “Single-shot End-to-end Road Graph Extraction” deals with a new method for fast extraction of road networks as graphs from satellite images. Points of interest, such as intersections or curves, are located by a convolutional neural network (CNF). Then, links are found between these points by a Graph Neural Network (GNN).

The deployment of this technique on board observation satellites could allow the updating of maps in real time, for example to facilitate the evacuation of populations during a natural disaster.

This paper has been accepted at the “Earthvision” workshop of the prestigious CVPR2022 conference (Conference on Computer Vision and Pattern Recognition) taking place in New Orleans at the end of June, and is already available in preprint

About the paper: here

These two papers are added to Gaétan Bahl’s previous publications on edge cloud segmentation and compact contour regression, and conclude his three years of thesis at IRT Saint Exupéry. Congratulations to him!

The third paper accepted in the framewoork oc CIAR project presents the world’s first deployment of SNN on-board a satellite in orbit. This deployment has been realized using SPLEAT, an FPGA-based SNN deployment tool owned by one of our academic partners: LEAT (Laboratoire d’Électronique, Antennes et Télécommunications) / CNRS (Centre National de la Recherche Scientifique). SPLEAT-based SNNs are compared to formal convolutional neural networks (CNN). While maintaining classification performances equivalent to those of the CNN, the SNNs allow to reduce by 6 the FPGA resources occupancy rate and to decrease by 5 the power consumed.

Congratulations to Nassim Abderrahmane, main author of this paper, but also to Benoit Miramond, Erwann Kervennic and Adrien Girard!