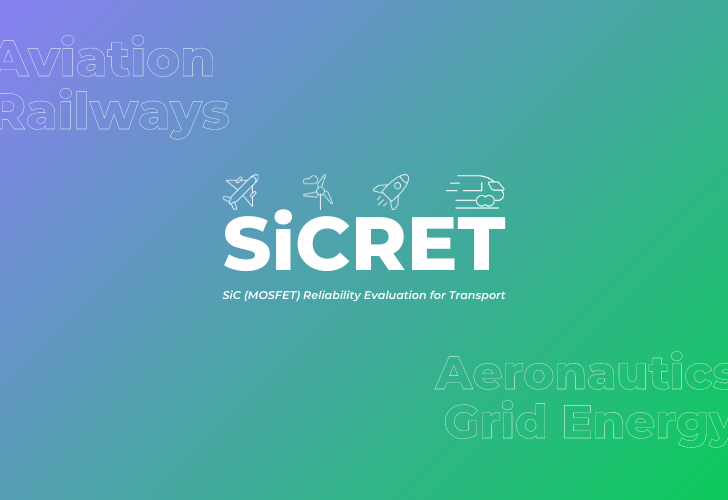 After a year and a half of activities, the SiCRET (SiC (MOSFET) Reliability Evaluation for Transport) project Team continues its studies on the reliability of Silicon Carbide power electronic devices. At the heart of the electric mobility transition, this project aims to enable the deployment of “dependable” MOSFET SiC technology in the transportation sector.

The project tackles the reliability of Silicon Carbide MOSFET and paves the way for the energy transition decade.

What is Silicon Carbide used for?

To fully understand the usefulness of Silicon Carbide in electronics (also known by its acronym “SiC”), we must first define what MOSFET technology is. The Metal Oxide Semiconductor Field Effect Transistor is at the heart of power electronic for mobility. Owing to its superior performances (withstanding high voltage, high temperature, and allowing fast switching) the integration of the SiC MOSFET in power electronics is supposed to introduce an unprecedented breakthrough in terms of efficiency, size and cost-effectiveness of future power converters.

The latter constitutes the brain of the electromechanical power chain, processing the DC energy providers by the source or storage element (e.i. battery) into an arbitrary, and even very complex, signal perfectly driving a given load (e.i. motor).

The SiCRET project takes the advantage of the convergencies between the four main branches of the transport sector – the automotive, the railway, the aeronautics, and the grid energy – to reach the critical mass of competencies and experimental resources necessary to match the ambitious technical challenges of the project.

The project gathers among the major players in the electrical power value chain across different fields: from stationary with Supergrid Institute, to aeronautics with Safran, including railways with Alstom and automotive with Vitesco Technologies. Liebherr covers both aeronautics and ground heavy-duty machinery. Most of the industrial partners are equipment integrators, with Alstom and Liebherr covering the full integration chain up to the final product (trains and heavy-duty machines respectively).

All fields represented in the project share the same major demands: in the order, reliability and cost. The project relies on the proximity with the device manufacturers, in particular through a major collaboration agreement with ST Microelectronics, but also with the main worldwide SiC MOSFET providers.

The industrial needs of these partners are complemented by a rich ecosystem of tests and technology investigation expertise and facilities. In particular, the scientific offer is represented by main public laboratories in the field: AMPERE in Lyon, IES in Montpellier, LAAS and LAPLACE in Toulouse).

The transfer and capitalization of the know-how generated by the project are assured by the close collaboration and interaction of these laboratories with three industrial test houses: Supergrid Institute in Lyon, Nucletudes in Paris, and Alter Technology in Toulouse. The expert panel is finally completed by the expertise and investigation capabilities of the French MoD (DGA in Paris) and the IRT Saint Exupéry, hosting infrastructures and staff. This guaranteed the proper working framework toward the achievement of SiCRET objectives.

The project aims to establish a solid knowledge background such to steer a consensus within the consortium and to leverage it later on to reach a larger public acceptance of the qualification procedures and design rules generated by SiCRET, through the interaction with institutional standardization bodies (e.i. AFNOR, JEDEC *, IEC) and our specialized network (e.i. AEC, ECPE…).

Thanks to this approach, the project is gaining visibility, especially in the eyes of end-users** and providers*** who are more and more interested in the results that the experts are gradually obtaining. The objective of this initial project is to establish a SiCRET ecosystem capable of becoming more and more self-sustainable within the national and European professional landscape.

“At the scale of single-user equipment, the energy loss reduction may appear small, but at a global scale, the gain becomes enormous.”

The exploitation of Silicon Carbide has several final objectives, but the most important is, of course, the reduction of the size of the pieces of equipment in terms of weight and volume, and the increase in performances in terms of efficiency. At the scale of single-user equipment, the energy loss reduction may appear small, but at a global scale, the gain becomes enormous.

As mentioned above, the main final objective of the SiCRET project is about increasing confidence in the deployment of Silicon Carbide MOSFET Technology. Indeed, the most important part of SiCRET relies on the reliability. In spite of many years of studies, SiC’s reliability remains still unknown at the industrial level.

Indeed, shortcoming in testing methodologies and design rules dedicated/adapted to SiC technologies results in an under-exploitation of the technology in the best case, and in the wrong use of the same in the worst.

But how to increase the users’ confidence towards this material? Several steps are necessary.

The first one is the Physics Of Failure (PoF) analysis and understanding, i.e. observing the way the devices degrade. This step is essential to establish proper test and design rules, hence the end-user’s confidence;

Indeed, in a second step, it is necessary to define adapted tests to characterize and evaluate the material. This step consists of SiC “testability”;

The third and last step allows defining the design rules that will permit to optimize the use of SiC technology, by choosing the right margin for the given application.

These steps will lead to the last, but not least, final objective of the SiCRET project, namely: to make the entire body of knowledge development by the project at complete disposal of SiCRET’s consortium first, and, later, to the entire community – academics and industrialists.

To ensure the correct deployment of the SiCRET project, its team puts in place several technical tasks:

By correctly following this technical framework, the team aims to build a SiCRET legacy that will last beyond the project’s time span of 3 years.

SiCRET Project, at the heart of the Energy Transition